If you’ve watched the first season of House of Cards, you may remember Frank Underwood (played by Kevin Spacey) frequenting a back alley barbecue with the best ribs in town.  Washington, D.C. is not known for barbecue – or really for being a typical Southern town – but Myron Mixon, the king of smoking meat, reminded me of a mix of Frank Underwood and his secret barbecue master, Freddy, when I recently attended one of his cooking classes and then read his book – BBQ Rules.

Living in Annapolis, the best barbecue was to be had at Adam’s Ribs.  Here in Hawaii, the closest to the flavor is the huli huli chicken smoked in parking lots, usually for fund raisers.  I’m not a fan of meat or barbecue, but experiencing Myron Mixon was an adventure in taste and tolerance.  Once I overcame my snobbish attitude toward the bad grammar and raunchy jokes, I learned a lot about barbecue and a little about the people who love it.

The self-proclaimed king of smoking – meats, that is – Myron Mixon proudly tells his audience he has won over a million dollars in prize money – to pay his mortgage and car payments -including state championships in thirty states from Georgia to Illinois, and has been inducted into the Barbecue Hall of Fame in Kansas City.  His book – BBQ Rules – includes anything you need to know about barbecue, including instructions for building your own pit, to cuts of meat (beef cuts, the whole hog, bird parts – and extras, with recipes for smoked cheese, cornbread, cobbler – even a smoked chocolate cake.  He also includes, with the help of his ghost writer, Kelly Alexander, smatterings of his colorful life.

One recipe that caught my eye was for pork cracklins’ – in Mixon’s words:

“…better than any damn skin you’ll ever have because you can’t buy these out of a bag – that crap you buy out of a bag is jus puffed air and fat.  This right here made with the skin of a hog is the real deal.  We get the skin that cracklings are made from after we get through barbecuing our shoulders, our hams, and even our whole hog.” 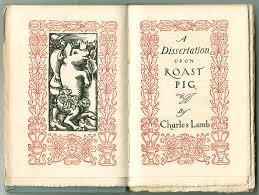 Charles Lamb would agree, although he phrased it a little differently in his essay, “A Dissertation Upon Roast Pig” in the early nineteenth century  (you can read the full essay online here):

“He burnt his fingers, and to cool them he applied them in his booby fashion to his mouth. Some of the crumbs of the scorched skin had come away with his fingers, and for the first time in his life (in the world’s life, indeed, for before him no man had known it) he tasted—crackling!…surrendering himself up to the new-born pleasure, he fell to tearing up whole handfuls of the scorched skin with the flesh next it, and was cramming it down his throat in his beastly fashion…”

Nixon included extra recipes for his cooking class graduates – the basic chicken rub is one I may try:

Marinate the chicken overnight in 4 cups chicken broth and 1 packet dry onion soup mix.  Remove from refrigerator and discard the marinade.  Preheat smoker to 250 degrees.  Apply the rub liberally to the chicken and press firmly.   (In class, Mixon advised us to “push it, push it real good” – just like Salt N Pepa sings.  Place the chicken, breast side up, on a meat rack with the handles down so the bird will be raised above the surface of the pans. Set the rack inside a deep aluminum pan.  Poor 2 cups apple juice into the pan underneath the meat rack.  Place the pan in the smoker and cook for 3 hours or until the breast meat reaches 165 degrees.  Remove the chicken from the smoker and allow it to rest on the rack in its pan for 15 minutes.  Carve and serve (serves four). 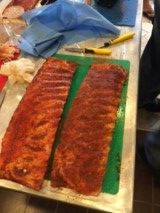