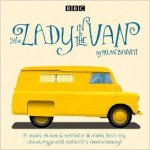 If you’ve missed Maggie Smith’s clever asides on Downton Abbey, her voice as The Lady in the Van by Alan Bennett on Audible’s BBC radio adaptation will have you smiling. Maggie and I took a long walk together, as she enacted the role she made famous in Bennett’s witty play and recently in the movie version.

When I heard Maggie Smith revealing her character’s life with the nuns, who tried to break her spirit but never succeeded, and her escape from the asylum for a year and a day thereby freeing her to live on her own, I realized this homeless character who lived in a van in Bennett’s driveway, had a colorful past.

Bennett has gone on record to confirm the source of the story – the bag lady who actually lived in a van outside his garden.  Sadly, so many homeless now have changed the landscape here, not the lone lady in a van who slowly made her way down the hill to Bennett’s house.  When I first came years ago, I remember two homeless men living in the park – both had the same philosophical view of the world as Bennett’s character, and neither wanted the Christmas cookies nor the old quilt I offered.  Like the lady in the van, they were independent, self-reliant, and had wild stories to tell.  Times have changed, and now hundreds make camp on the sidewalks.  A few nights ago, the news scared residents with a stabbing and a murder between two homeless men in that same park.  Local residents now treat the homeless with fear and avoidance.

The story offered glimpses of humanity thorough the social worker who brought clean sheets and the emergency medical technicians who handled her with dignity and respect, never cringing at her shabby clothes or her smell.  And, of course, Bennett himself, who finally discovered her past – after she died – but always treated her well while she was alive.

Amazing how all came together for this story – the lady in the van living outside a writer’s window for fifteen years, a wry Englishman who has even taken on the Queen in his astute ramblings  (The Uncommon Reader), and the friendship of the writer and the famous actor who brought the play to life.

The Lady in the Van has a poignant message.