Liane Moriarty tells a satisfying tale in her latest book, now on the bestseller list – Big Little Lies.  Like her popular The Husband’s Secret, this story has the compelling characters, twisted lives, horrible villains, and lovable heroines. Best of all, the ending punishes the wicked and rewards the good – nothing like a happy ending, especially when the villain is destroyed.

The book opens with a murder, and Moriarty cleverly keeps the reader guessing on the identity, as she weaves the tale around the heroine and her entourage. It would spoil all the fun to tell you too much, but this fast light read is another success on Moriarty’s growing list of winners. 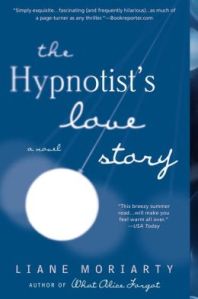 When one of Liane Moriarty’s funny, quirky books appears on my library list, I know it will be a mood lifter, and The Hypnotist’s Love Story was no exception. With the style I came to appreciate in What Alice Forgot and The Husband’s Secret, Moriarty connects unlikely possibilities with ordinary circumstances and likable characters.

The story revolves around Ellen O’Farrell and the clients she tries to help with hypnotherapy. From the bride to be who is trying to give up smoking to the overweight lawyer, Moriarty mixes serious issues with gentle caring – and a few laughs. When Ellen meets Patrick, a widower, who has a former lover who is stalking him, the scary incidents dovetail with her new romance. Saskia, the stalker, is one of Ellen’s clients.  All ends well but not before the plot takes some strange turns.

With not as many surprises as her later work, The Hypnotist’s Love Story is still a page-turning fast read and a welcome change of pace.

What if – you found a letter with instructions to open after the writer died, but that person was still alive – would you open it?  I would not be able to resist, and when Liane Moriarty teased with that cliffhanger through several chapters – about 200 pages – of The Husband’s Secret, keeping the contents hidden, the speculation of what is in that letter is as much fun as learning the actual content.  If you remember Moriarty’s What Alice Forgot, you know she can take an improbable storyline and drench it with humor, pathos, and even a few life lessons.

Three lives intersect in this drama: Cecilia finds her husband’s sealed “do-not-open-until-after-death” letter in a stack of old tax forms, while he is on a business trip; Tess flees from Melbourne to Sydney with her young son when she discovers her husband and best friend have fallen in love – and asked that they all live together as one big family; Rachel’s beloved two-year-old grandson is about to relocate with his family to New York City, as she continues to search for the murderer of her teen-age daughter, killed twenty years ago.  Yes, there is a murder, but the mystery of whodunit is solved early in the tale, with consequences and suspicions connecting these three women’s disparate lives.

The story premise is captivating – I read it quickly to know the outcome, and Moriarty does produce an unexpected surprise at the end.  After the shocking climax, the denouement offers more likely “what if” scenarios that have a nostalgic effect, but the clear message to be responsible for yourself, not everyone else, can connect to all of us who get tired of being good all the time.

Hard to categorize Moriarty’s style – more than chick lit, mystery thriller, romance, beach read – and always satisfying.  Now I’m looking for some of her earlier books – seems there are quite a few I’ve missed from her website.

Review of “What Alice Forgot”