What if an assistant district attorney had to defend his fourteen year old son in a murder case? Sound like a television Father’s Day drama? That’s just what William Landay delivers in his courtroom crime story – Defending Jacob. Although the characters follow a formulaic stereotype and some of the dialogue is reminiscent of Mickey Spillane, the plot is fast-paced, easy reading, with enough change-ups to keep you reading.

Jacob’s middle schooler life is a mystery to his parents until one of his classmates is found stabbed in the park adjacent to the school. Suddenly, the bullying, the hidden knife, a fingerprint, and Jake’s loner personality implicate him as the murderer. Landay effectively uses two catalysts in the mix: the internet – citing Facebook, Twitter, and iPads as adding to public suspicion; and the “murder gene” – a genetic tendency to violence.

I’ve had this book on my shelf and decided to give it away to make room, but, first had to read it. A quick read – less gruesome than other crime novels – Defending Jacob has some father/son relationship angst and family-in-crisis warts, but, for the most part – just another good legal thriller – scheduled to come out in a movie theater soon with talk of Michael Shannon playing the father.

The ending came as a surprise; don’t stop reading after court adjourns.

I found the perfect exercise program with a vook – the digital video book.  After reading about this newest phenom substitute for real books in the New York Times, I tried to download the iphone app for Yoga in Bed: Awaken Body, Mind, and Spirit in 15 Minutes.

I kept getting one of those messages – not as bad as the old “you have performed an illegal operation,” but close.  Maybe my chakras were not in order?

So, next I tried downloading (as directed) on my computer.  At the website, I watched a short trailer that looked promising, with instructions for downloading to iphone, ibook, or kindle, at varying degrees of cost.  Downloading the 15 minute vook took

longer than 15 minutes – time to do some deep breathing and practice patience. 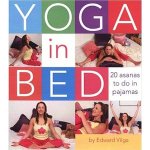 The library has an actual book – Yoga in Bed: 20 Asanas to do in Pajamas by Edward Vilga – so I checked that out – for free.  Lots of full page pictures demonstrating how to “Invigorate Your AM,” with coffee cup meditation, and how to “Ease into Dreamland.”

My favorite section is “Nap Your Way to Nirvana” – I may already be ahead on that one.  I finished reading the book; still downloading the vook.