Reading myself to sleep with:

And when I feel serious, I thumb through Atul Gawande’s Being Mortal, as sobering as promised in his interview with Jon Stewart on the Daily Show – a book about the inevitability of death.  Despite modern medicine, we all die.   Just as Stewart balanced the interview with humor, I counter the heaviness by alternating with the escapades and adventures of Becky and Maggie.

Oh, no, Mark Bittman, my Italian grandmother is rolling over in her grave – how could you recommend using a food processor to make pizza? In his article for the New York Times – For Chefs at Home, A Pie Above the Rest – Bittman proclaims that the best pizza only needs “…some confidence, practice, and a food processor.” The sacrilege reminded me of Jon Stewart’s ridicule of Donald Trump eating pizza with a knife and fork – another no, no.

Pizza can be anything from an English muffin covered with ketchup and sprinkled with Parmesan out of the plastic container to the thick-crusted Sicilian breads with home-made tomato sauce and slices of real mozzarella and aged Parmigiano Reggiano cheese.

When in Italy years ago, the pizza on the plaza was different to my American palate, but never a food processor in sight – I could see the cook making it.

My Italian ancestors passed on a recipe that keeps satisfying – an egg, a little olive oil, some whole milk, yeast proofed in warm water – mixed with flour – by hand. Part of making and kneading pizza is the satisfaction of working the dough (imagining it to be something or someone else). Turning on a food processor just doesn’t relieve suppressed anger – better than punching a pillow. 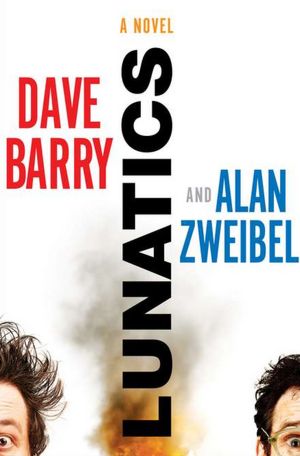 In a funny confrontation between two “wild and crazy guys,” Dave Barry and Alan Zweibel will have you thinking they are the Lunatics in their namesake novel. In spite of myself, I ended almost every chapter laughing out loud.

Taking turns being idiotic, each author alternates writing chapters as Philip, the happy owner of a pet store called “The Wine Shop,” and Jeffrey, a forensic plumber, angry at the world for getting in his way. Of course, their paths cross.  In a ridiculous sequence of random events that innocently starts with a soccer game, the two become embroiled in a series of mishaps that has them chased by the police, terrorists, bears, and pirates.  They almost destroy the world, and then put it back together in better shape than before their exploits.

The language can be crude and insensitive; think Jon Stewart and Steven Colbert. If you don’t like your laughs rough and bawdy, or if you are a Prius driver, this book may not be for you.   On the other hand, if you are thinking about taking one of those new cultural vacations to Cuba, you might want to read the book before you go.  Both authors get carried away, and the side bars – although funny – seem to run-on, but if you decide to skip through some of it, be sure to check out the Republican National Convention at the end (if you are a Republican, you may not be as amused).

Lunatics is quick silly diversion; I wondered which author wrote each character (in an NPR interview, Dave Barry admits to being the forensic plumber), but I knew they must have had fun writing their plotless wonder together.

Meghan Daum may be the L.A. Times equivalent of Maureen Dowd in the New York Times.  Her political columns are witty and acerbic, attacking idiosyncracies with the smile and parry of  Jon Stewart – funny with underlying truth.  Although I have sworn off memoirs, I read her latest book – looking for that humor and zing.  Life Would Be Perfect If I Lived in That House did not disappoint.

Daum refers to using the royalties of the novel she wrote while in Nebraska – one of her many places to live – to ultimately buy a house.  I found that novel – The Quality of Life Report.

Although fiction, the book matches some of Daum’s brave revelations about her personal life in her exaggerated memoir – you write what you know?   The character Lucinda Trout might have been having the same adventures as Meghan Daum, but I had read the nonfiction sequel, and Lucinda was (mostly) fiction.

In the novel, after a visit to Prairie City, Nebraska to cover a news story on drugs, and noting the difference in rentals – 1000 square feet for $400 a month compared to her New York 400 square foot rental for $2000 – Lucinda Trout creates a documentary project that would have her feeding reports on “the quality of life” from her on-site experiences over a year from Prairie City.

While the book was funny in places, it didn’t hold the same interest for me as “Life Would Be Perfect…”  I had been fascinated with Meghan’s real adventures; when I read them as pieces of a fictionalized venture with Mason – not so much.   But I still like Daum’s style – maybe the next book will reel me back in.

you may remember Wallis’s voice as the Sheriff of Radiator Springs – a 1949 Mercury Club Coupe.

In a short preview, Wallis recounted how Crockett, the man, was 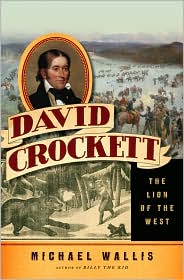 actually more interesting than the myth that defined him or the Disney version as “King of the Wild Frontier.”   Wallis’s anecdotes  about Crockett’s life, demonstrated that “truth is better than fiction.”  If the book is as entertaining as the author, David Crockett: The Lion of the West, will be worth reading.