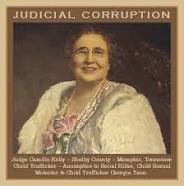 The picture of Beulah Georgia Tann, who used her Tennessee Children’s Home Society to sell children, hides all the horror and misery Lisa Wingate uses as the framework for her fictionalized tale of a family of river gypsies caught in the net of children stolen for profit – Before We Were Yours.  Although the corruption was exposed in the media (Sixty Minutes) and nonfiction (Raymond’s 2007 The Baby Thief: The Untold Story of Georgian Tann, the Baby Seller Who Corrupted Adoption), the appalling history was new to me.  I remember my grandmother cautioning me about baby stealers, but Tann’s grand scale child trafficking seems more like fiction than the reality it was until the ninety-fifties.  The history is worth discussion.

Briny and Queenie were poor river gypsies with a brood of blond curly-haired children, ranging from a two year old boy to four girls, with twelve year old Rill as the oldest. They live aboard an old boat, the Arcadia, fishing and bartering  with other riverboat people.  When Queenie’ s latest pregnancy ends in the premature birth of twins, the family is suddenly torn apart.  With Queenie in a nearby hospital, the children are stolen from their river barge and sent to one of the Tennessee Children’s Home Society collection sites; it would be a disservice to call it an orphanage.  One by one, each child is bartered out to a new home.

Wingate mixes adventure and romance, cleverly creating mystery and suspense as the story shifts back to the present day investigation of a thirty year old grandchild of one of the stolen children, Judy Stafford.   The Stafford family background remains a secret, and with Judy, the grandmother now suffering from dementia, it might have remained so.  Circumstances trigger Avery’s exploration of her grandmother’s past, while she struggles with her own future as the possible successor to her father’s political legacy, and her marriage to a longtime friend she is not sure she loves.

As the chapters alternate between 1939 and the present,  the background of the river family and the consequences of Tann’s actions slowly emerge.   The two time frames converge to reveal the children’s fears and hopes.  By using a fictionalized aggregate of the children targeted by the corrupt Tann, Wingate makes the story real.  By teasing the reader with the identity of the grandmother until the end, she creates a page-turner; I read the book in one sitting.

Although Wingate offers her commentary on how lives of privilege may not always be as they seem, the historical context of poor children kidnapped and sold to wealthy families throughout the country from the 1920s to the 1950s carries the importance of the drama.