Maile Meloy hooked me with her Apothecary series for young adults; when Meloy’s fellow Guggenheim winner, Ann Patchett, praised Do Not Be Alarmed, the book became my next must read. Unfortunately, I started the book late at night and pulled my first all-nighter in a long time to finish it. I just couldn’t put it down.

If you’ve cruised to the Panama Canal and toured the Central American countries along the way, you will immediately connect with the venue. When three families decide to explore one of the ports of call – what seems like Costa Rica (although Meloy does not actually name it), their lives are traumatized and changed forever. The husbands take advantage of a golf club connection to spend the day on the links and the three wives with children ranging from six to fifteen hire Pedro, a handsome young local, to drive them to ziplining through the trees. When Pedro’s vehicle gets a flat tire, the plot takes the turn from happy vacation to danger.

The parents’ interpersonal issues offer some relief to the constant terrors the children face, from drug-dealing kidnappers to hungry crocodiles. Meloy manages to feed their helplessness and shows a range of ways people deal with threat.  But it’s the children who captured my attention, from 6 year old June who worries about her bunny, eight year old diabetic Sebastian who will not survive without his insulin, fourteen year old Isabel blooming into adolescence, and calm centered eleven year old Marcus. My favorite was Penny, an eleven year old who reminded me of Reese Witherspoon in her perspicacious role as a teenager in the movie “Election.”

Do Not Become Alarmed is a thrill ride; the ending brings all the strings together as almost an afterthought. And you wonder what kind of lives they will all have, especially the children, years later when their misery catches up with them.

If you liked Ann Patchett’s Bel Canto, Meloy’s Do Not Become Alarmed will give you the same thrilling yet thoughtful experience. You may find it as impossible to put down as I did.

Read my review of The Apothecary –  here

Independent American book sellers have listed their picks for the 2012 Indies Choice Book Awards and the E.B. White Read-Aloud Awards.  If you haven’t read them yet, click on the title for the review and decide where to start reading…

Adult Fiction Book of the Year: The Marriage Plot by Jeffrey Eugenides

Adult Nonfiction Book of the Year: Blood, Bones, and Butter: The Inadvertent Education of a Reluctant Chef by Gabrielle Hamilton

Adult Debut Book of the Year: The Tiger’s Wife by Téa Obreht

When was the last time you read a book aloud?  Even to yourself? The E.B. White Read-Aloud Awards offer some ways to start.

E.B. White Read-Aloud Award – Picture Book: I Want My Hat Back by Klassen

Short stories appeal to me – a quick fix when a quiet moment needs acceleration.  Maile Meloy’s collection of 11 short stories in Both Ways Is The Only Way I Want It includes simple, striking plots with flawed characters at the crossroads of deciding which way to have it – when they can’t have it both ways.

Each vignette connects to a dilemma confronting the key character – some funny, others tragic, and the settings range from Montana to the East Coast – one in Argentina. Meloy sometimes makes the decision obvious; other times she will leave you wondering what will happen next – or hoping that you know.  My favorites were the first and last stories. In  “Travis, B.”  a young Montana ranch hand falls in love with a beautiful young lawyer who commutes nine hours one-way twice a week to teach a part-time adult education class.  The situation is set for failure – her commute, her teaching job, their differences.  Although Meloy plays on the romantic possibilities, the impossibility wins out.  In “O Tannenbaum” a stranded couple named Bonnie and Clyde hitch a ride with a family out to cut down their Christmas tree.  The danger is not in picking up the strangers but in the yearnings they bring out.

In between are assorted tales – most with some humor and with O’Henry like shifts in the possibilities – unexpected twists, but not necessarily with O’Henry’s trademark happy endings.  Meloy cleanly creates scenes with duality, and it’s possible to see the resolution going either way – but probably not both ways.

After reading Meloy’s The Apothecary, targeted for a young adult audience, I looked for more.  This author knows how to tell a story – long and short. 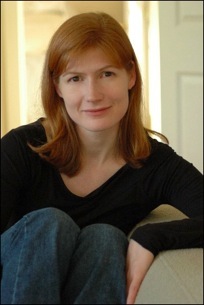 Asked to list her top 10 favorite books, the author of The Apothecary named her inspiration – more than 10.  Have you read any of these classics?  What books are in your top ten?

As Leonardo Di Capario and Clint Eastwood immortalize J. Edgar Hoover in a new biopic, Maile Meloy finds inspiration in the fictional lives of a Hollywood family on Hoover’s “list” who avoid testifying against their friends by relocating to London in The Apothecary. At a time when children were taught to duck and cover under their desks as protection from a bomb, and everyone was suspected to be a Russian spy, Meloy neatly connects history to fantasy in a clever mystery.

Susan is a Nancy Drew-like detective, homesick for America and feeling more than the usual angst about being in a new school. The local apothecary offers her a powder to help her adjust to her new surroundings, but when he is kidnapped by Germans, she finds herself embroiled in a spy thriller with his son, Benjamin, to save the local apothecary and possibly the world from nuclear disaster. Their immediate mission is to protect the Pharmacopeio, the apothecary’s book of mysterious formula, using plants to evoke extraordinary phenomena.

Of course, their curiosity has them applying the book’s strange recipes almost immediately. They create elixirs that turn them temporarily into birds to escape their pursuers or make them invisible in a funny sequence of preteen angst. Ian Schoenherr’s black and white graphics, sprinkled throughout the narrative, generate an other-worldly aura, and Meloy adds characters to keep the action suspenseful and humorous: Pip, the handsome street-wise boy straight out of Dickens, who can pick locks and finesse adults as well as children; Mr. Danby, the Latin teacher/war hero, who may be playing both sides of the spy game; Shiskin, the bumbling Russian double-agent; Jin Lo, the young beautiful and smart Chinese chemist.

The Apothecary is fun to read; suspend your belief and enjoy a world of impossible solutions. And imagine, if you were able to turn into a bird to fly away for a while, what kind of bird would you be?

This is Meloy’s first novel for young readers, but her other books – for adults –  include a short story collection – Both Ways is the Only Way I Want It  and the novel Liars and Saints.