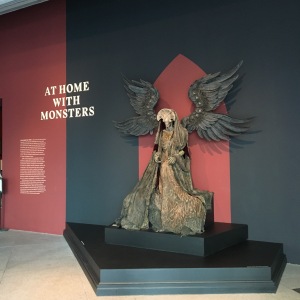 Do you like scary stories? I still remember the thrill of reading my first Edgar Allen Poe tale and wanting more. When I viewed the special exhibit at the Los Angeles County Museum of Art (LACMA) on director Guillermo del Toro’s collection, I found a number of familiar macabre literary references,  including life-size statues of authors H.P. Lovecraft, dubbed “The King of Weird” by the New York Review of Books, and Edgar Allan Poe. 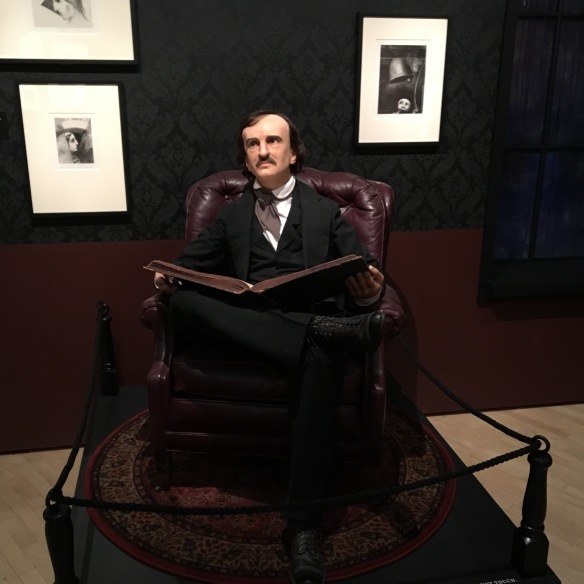 And the seven foot face of Mary Shelley’s Frankenstein peering down at me from a balcony.

The exhibit – At Home With Monsters – includes over five hundred sculptures, paintings, costumes and books from the filmmaker’s private collection and offers an unusual look inside the creative process that converts stories into film.

I was drawn to exhibits showcasing the connection between books and film.  A short film brought Poe’s “The Tell-Tale Heart” to life, with storyboards and illustrated  notebooks, and Lovecraft’s stories of vampires and the pale man emerged in del Toro’s depictions in the films Blade II and Pan’s Labyrinth.

One of the most touching exhibits focused on a freak show at Venice Beach where del Toro notes “normal people are capable of monstrous behavior toward those who are different.”

Although the dimmed lighting in some rooms and sound effects in others added to the atmosphere, the monsters on show were not so scary.  Del Toro says, “The real monsters in our lives are in fancy tailored suits. There’s nothing more scary than people that are profoundly ignorant and profoundly certain. They always go together.”