To prepare for Richard Russo’s return to North Bath after twenty years in the upcoming publication of Everybody’s Fool, I wanted to review its inception in his 1993 novel, Nobody’s Fool.  The most painless and enjoyable way to do that was to watch Paul Newman, Philip Seymour Hoffman, and Jessica Tandy in the Oscar-nominated movie version of the book.

Before watching the movie, I read Daniel B. Roberts  comparison in his article Nobody’s Fool, book vs movie, and was reassured that Paul Newman was the embodiment of Sully Sullivan.  The excerpt he cited reminded me of the theme of free will vs predestination I had mulled over when reading the book years ago.

“Sully shook his head, feeling much of the same frustration he’d felt two days ago listening to Cass, who’d explained to him her lack of options with regard to her mother. Here was Wirf telling him the same thing, that he was damned if he did, damned if he didn’t. Maybe Sully’s young philosophy professor at the college had been right. Maybe free will was just something you thought you had. Maybe Sully’s sitting there trying to figure out what he should do next was silly. Maybe there was no way out of this latest fix he’d gotten himself into. Maybe even the trump card he’d been saving, or imagined he was saving, wasn’t in his hand at all. Maybe his father’s house already belonged to the town of Bath or the state of New York. Maybe Carl Roebuck had bought it at auction for back taxes… Maybe even Carl Roebuck didn’t have any choices. Maybe it just wasn’t in him to be thankful for having money and a big house and the prettiest woman in town for his very own. Maybe he was just programmed to wander around with a perpetual hard-on, oozing charm and winning lotteries. Still, Sully felt the theory to be wrong. It made everything slack. He’d never considered life to be as tight as some people (Vera came to mind for one, Mrs. Harold for another) made it out to be, but it wasn’t that loose either.”

Roberts assured me of the connection of the book to the movie:

“The pacing {in the movie} is especially perfect: for example, the book starts out with a lengthy (admittedly slow) description of the town of Bath. The movie, somehow, respectfully pays homage to Russo’s style by doing the same, but accomplishing in just the three minutes of opening credits the same sort of scene-setting and establishing of the quaint town where this story will take place.”

My May Day mission is clear.  I have found the old movie on Netflix and can squeeze it in before the last episode of The Good Wife.  Then, I will be ready to read Everybody’s Fool – preordered on iBooks to be delivered soon.

A day to celebrate Spring and flowers – whatever you call it.  Jeffrey Kent’s book with illustrations by Minako Ishii is a flip picture book that can be read front to back or back to front.   With beautiful pictures and explanations, Kent connects the Hawaiian celebration to the British May Day, and includes instructions for making a lei. 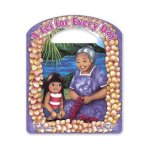 Beth Greenway’s A Lei for Every Day is a board book, teaching days of the week with tutu (Hawaiian word for grandmother).

Related Post:  Do You Have Time to Get Lei’d?

May 1st is Lei Day here in Hawaii.   Locals make leis, buy leis, give leis – and get lei’d.  May Day is Lei Day in Hawaii

Recently, someone told me that reading is not just an escape; it’s a way of avoiding reality – time could be better spent than in reading.    Maybe so, or maybe reading is a type of meditation, a way to be mindless of your own issues and submerge into someone or something else.

Like meditation, the effect of reading a good book may be that you feel better, clearer, fresher – even more mindful.