Something is about to burst.

The clock is crouching, dark and small,

As the end of another year approaches, what happens to you?  Are you instilled with the remaining fervor of the holiday spirit? Are you complacent observing the folly of others making resolutions?  Are you depressed pondering things undone?  Charles Dickens offers an old tale, written in the nineteenth century and set in Italy – The Chimes.  If you are a fan of “The Christmas Carol,” you will note the similarity in tone, and enjoy the possibilities of the ending.

The Chimes was one of five in a series of Dickens’ Christmas stories. Appropriate for New Year’s Eve, the moral of the story focuses on the choices we make and their consequences. Like “A Christmas Carol,” a ghost guides the way.

The story opens with the chiming of church bells. After Toby, a messenger, delivers a letter to Lord Bowley and and receives the response – to imprison the man mentioned in the letter, he accidentally bumps into a man carrying a little girl. An apologetic exchange follows, during which Toby discovers this to be the very man to be imprisoned. Toby invites the two home for the night, but he continues to be disillusioned.

He finds  his daughter, Meg, seated by the fire drying her eyes about her apparently aborted marriage plans. When reading his paper,  he comes across the account of a woman, driven from her home by poverty and misfortune, who has killed her child and herself.  He falls asleep convinced of “the inherent vileness of his class.”

The Goblins of the Chimes appear and spirit the sleeping man to the bell tower. His dream takes him on a journey to the future, revealing the dire consequences if he continues to believe there is no purpose for his life or the lives of those around him.  In the end,  Meg wakes Toby from the dream. It’s New Year’s Day. Neighbors enter with greetings and congratulations and a happy party ends the story.

You can read this short tale as you ponder your own resolutions, while waiting for the clock to chime twelve tonight.  Keep your spirits up… 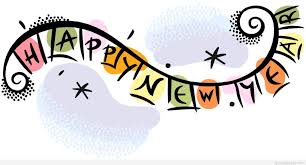 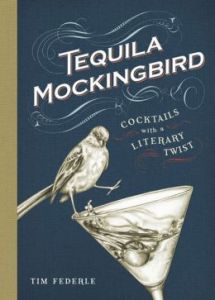 Tim Federle has a recipe for both alcoholic and nonalcoholic drinks and each has a reference to a literary classic in Tequila Mockingbird: Cocktails with a Literary Twist.  The ingredients are simple and the recipes easy.  The labels are conveniently linked to the book title and date of publication.   Some of my favorites, in addition to the book title:

A chapter titled “Bar Bites for Book Hounds” includes snacks for the reader with the disclaimer – “…caution: this section may contain nuts…and that’s just the protagonists.”

If you plan to go to bed early this New Year’s Eve, or toast in the new year with a beverage as uncreative as ginger ale, you might still enjoy leafing through this slim volume for a few laughs or some ideas for the next time you host the book club – and a list of books creatively transformed.

Old Father Time, the inventor of clocking the moments, plays a role in educating two souls who would manipulate the time they have left in Mitch Albom’s The Timekeeper. Albom offers this schmaltzy parable with three characters: Dor, the first man to measure time; Victor, an old man trying to cheat death; and Sarah, a teenager who wants to end her life.

On New Year’s Eve, the passage of time is marked with celebrations and sometimes thoughtful resolutions. With his usual moral directive, Album’s story is a reminder to appreciate what you have, and to live in and appreciate the moment.

Click on any date on my 2011 calendar to find something to read.

Last January, the task seemed monumental – not that I didn’t have enough to say (sometimes enough for more than once a day) – but the discipline of posting about a book, or a topic related to reading books…everyday…  could I?   Oh yes, and with pleasure.

And, yes, I really did read everything.   My secret?  When I have a choice of watching yet another lame television show or reading a book – no contest.  Besides, having relocated to another time zone, I sometimes just cannot find those old favorites.

Thanks to all those who silently encouraged me, to those who expressed a “like,” and to those who commented and sometimes carried on a conversation.

Will I try again for 2012?  Probably not every day, but I will continue to post regularly and look forward to sustaining the momentum and the fellow readers I’ve met this year.

Tonight, as I have one ear on Dick Clark’s Rockin’ Eve, I’ll be reading Chris Bohjalian’s Night Strangers – a strange ghost story set in New England – that should keep me awake past midnight.

Do you watch the ball drop at Times Square or breathe in the fireworks?

Your New Year’s Eve tradition marks the promise of more to come; this time last year I started a tradition of listing my top 10 reads of the year.

Let me know what yours are…     and Happy New Year!