After a day of smiling at strangers, trying to follow the Chinese wisdom of Michael Puett’s The Path, I came across Calvin Trillin’s essay for The New Yorker – Imaginary Mitzvahs – and my true self reverted to type.

When I travel, I often tear out essays I want to read again from The New Yorker, before recycling the magazine to a flight attendant.  Trillin is one of my favorite funny cynics, and his litany of good deeds gone undone restored my cranky equilibrium.  But I did have a good laugh.

In Imaginary Mitzvahs, Trillan reviews his attempts to be a good person. When he graciously moves to a middle seat on the plane between a woman holding two crying babies and “a man whose stomach hung over the armrest” to accommodate the two men who “hadn’t seen each other in years…{this} flight is the only time we have to catch up,” he notices one man falls asleep throughout the flight and the other reads.

When he obliges his newly gluten-free vegan cousin by foregoing the sumptuous meaty French meal he had anticipated, his taste buds suffered but he felt virtuous.

Finally, when a cat in a fiery building needs rescuing, he resists – despite his inclination to do good.

There is a limit, after all.

Have a laugh – Read the essay : Imaginary Mitzvahs

As with all of Alice Hoffman’s books, “The Museum of Extraordinary Things” includes strange characters in unusual circumstances who must use theIr powers to overcome adversity and find themselves. Hoffman weaves a Grimm-like tale with an evil villain and an unlikely hero and heroine, who are destined to meet. If you can suspend belief, the story will carry you through a gruesome mystery set in Coney Island at the turn of the twentieth century.

Ezekiel, a Jewish boy who changes his name to Eddie, and Coralee, born with webbed fingers, follow singular paths until late in the book, when the body of a dead girl draws them together. Both have unusual talents – Eddie can find missing bodies, and Coralee can hold her breath underwater long enough to pass for a mermaid in New York’s Hudson River – a talent her abusive father hopes to turn into a profit.

As I travel through California, I’ve come to a stop with fewer distractions at Asilomar campgrounds, and finally have finished my traveling library book.
If you are a fan of Hoffman’s facility for turning the ordinary into the other worldly, with her asides of historical drama, you will enjoy the story. But this book is not for everyone.

Rather than describe the many twists, I’m directing you to Katherine Howe’s well- written review in the New York Times – “Girlfish.”

Howe clearly outlines the story, and offers a note of caution: Hoffman’s melodrama does get a little convoluted. The story digresses many times with the main characters’ history as well as Hoffman’s views and diversionary soliloquies. I skipped some of the rambling, and wondered why Hoffman did not end after the dramatic fire and rescue scene…
yet, I liked this book – it carried me away… 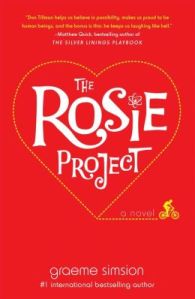 When an Italian tells a joke disparaging the Italians, is it less insulting – or just insensitive and ignorant?  Although Graeme Simsion’s The Rosie Project is a humorous romantic tale, the underlying ridicule of someone with Asperger’s syndrome is hard to ignore.  If you can dismiss the main character’s social ineptness as the idiosyncracies of the stereotypical professor nerd, you might enjoy the ridiculous situations and laugh at the literal comments.  If you can appreciate the happy ending as hope for those who suffer being different, you might bask in the possibilities for improved relationships.  If you can forget the author’s references to autism, you might see awkward actions as charming.

Gabriel Roth in his New York Times Review – Without a Cue – notes:

“It’s cheering to read about, and root for, a romantic hero with a developmental disorder…Simsion’s debut and a best seller in his native Australia, reminds us that people who are neurologically atypical have many of the same concerns as the rest of us: companionship, ethics, alcohol…The ultimate convention of romantic comedy is that love conquers all, but to propose that it can so easily mitigate such a painful condition may be to take convention too far.”

Although I laughed at times at Don’s misadventures as he searches for the perfect mate and finds one in the imperfect Rosie, I felt uncomfortable doing so. 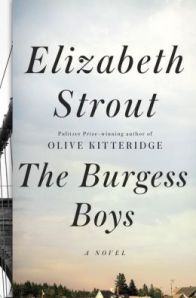 From a tragic childhood incident and a headline grabbing prank turned into a hate crime, Elizabeth Strout slowly explores the subtle interactions of siblings in The Burgess Boys.

Bob, a legal-aid lawyer in New York, and Susie, a divorced optometrist who never left Maine, are twins, yet they have grown into strangers as adults who barely tolerate each other. Jim, the older brother and successful Manhattan lawyer, famous for helping to acquit an O. J. Simpson-like criminal, takes every opportunity to flaunt his success and belittle his brother and sister. Their small Maine hometown of Shirley Falls pulls them back together when Zach, Susie’s desolate teenager, is arrested for throwing a frozen pig’s head into the town’s Somali mosque during Ramadan.

When Jim and Bob return to Shirley Falls to offer legal and moral support to their sister, Zach’s dilemma becomes secondary to the intolerance of the locals who feel invaded by a growing population of Somali, and the Somali Muslims who live in displaced fear of the terrorism they escaped in Africa. The dialogue hints at the seething prejudice in the town mixed with the forced charity, absent of real understanding. To be sure you understand, Strout has an omniscent narrator chiming in to explain.

But the incident is only the catalyst to the issues facing the Burgess boys and their sister. The death of their father looms over the flawed personalities: four-year old Bob, left in the car with his brother and sister, accidentally released the car in the driveway to run over Dad, leaving them orphaned. Later in the book, the incident takes on new meaning, as the brothers verbally duel over Zach’s fate. The accident changed the family dynamics with their mother overcompensating for Bob’s guilt and Jim taking on new bravado, as the everlasting torturer of his brother. Susie is left out – disliked and ignored, to grow into a bitter divorced woman – with a strange son. The supporting cast of spouses and neighbors inject a mix of vitriol and sympathy; especially one character who provides a sudden jolt of karma to one brother when all seems to have been resolved with Zach.

The setting goes back and forth from Manhattan and Brooklyn to Shirley Falls, Maine; but with differing perspectives of both areas. When small town Susie finally visits New York City, she is overwhelmed; Bob finds some comfort in his memories of small town living; Jim only wants to return to demonstrate his acquired big city prowess.

The book sputters in starts and stops, with the constant bickering, anxieties, jealousies, and any other emotion possible with adult siblings. At times, you will want to send them all into the corner for a time out. Nevertheless, they are there for each other – as families usually are – and in the end, they all finally grow up and into adults with tolerance and more understanding of each other. Strout’s characters are not likeable, but they are unforgettable.

A young police officer dies in the small upstate New York town where he grew up; the apparent suicide could be murder and a conspiracy in Jenny Milchman’s debut thriller – Cover of Snow. As Nora investigates her husband’s untimely death, she uncovers secrets from his past and a police force that may be criminal.

The action is sometimes halting and confusing, and you will need to persevere to get beyond the grief-stricken widow platitudes. The twists in plot and characters who disappear for chapters subtract from the drama, but Milchman effectively uses the eerie atmosphere of forbidding, snowy desolation in her descriptions of the surroundings to create an ominous tone that she mines to create suspense. The thrills escalate as the story comes to a predictable end, but along the way Cover of Snow will give you some chills.