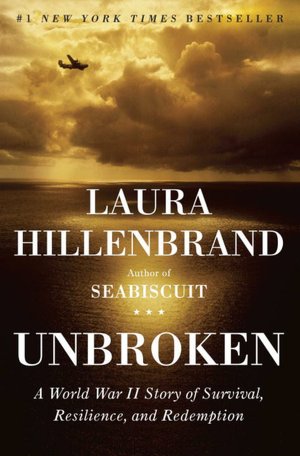 Maybe it’s the racing or the underdog that attracts Lauren Hillenbrand to look for the story behind the phenom.  In Seabiscuit, she wrote about a famous racehorse with unlikely prospects that goes on to win. In Unbroken, an Olympic runner from Italian immigrant parents, and the ultimate survivor of World War II is her focus.

Learning about Louis Zamperini’s saga reminded me of having coffee with an elderly man who had been through the war and wanted to tell his story – with every detail painfully remembered.  Hildenbrand never had the cup of coffee –  her disability prevented her from meeting Zamperini in person – but she conducted over 75 interviews over the phone.  Her ambitious research used documents, diaries, letters, and any available data on the life of a man who came to represent one of the last surviving war heroes.

As Zamperini tames his youthful tendency to juvenile delinquency by honing his athletic talent – all the way to the Olympics, Hildenbrand fills in the family and friends influence before getting to the meat of her book –  the horrors and misery of Zamperini surviving on a raft in the ocean after being shot down, only to become a tortured prisoner of war, and then returning to civilian life unable to cope.  Zamperini’s Japanese torturer, Watanabe, is the villain who seems to get away with murder.  The search for Watanabe, after the war is over, becomes a suspenseful thread.

In telling Zamperini’s story, Hillenbrand personalizes a piece of history.  Her story seems pedantic at times, but her accomplishment in writing and researching her subject over seven years, despite her disability, is a testament to her own capabilities as an underdog who is determined to stay the race.