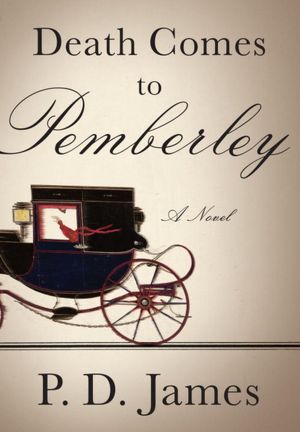 P.D. James is still very much alive at 91 years old, but her writing style in Death Comes to Pemberley is eerily Jane Austen. If you are a fan of Pride and Prejudice, you will recognize all the 19th century characters, and comfortably fall into the rhythm of silver polishing, gossip, and courtships. If you are missing Downton Abbey, the upstairs/downstairs references at Pemberley, Darcy’s elaborate estate, will sooth you – but not for long – this is a murder mystery.

A proper after-dinner gathering at the Pemberley estate is abruptly interrupted by Lydia, Elizabeth’s erstwhile sister now married to that rogue Wickham, screaming that someone has been shot in the nearby woods. A search through the dense fog uncovers the body and a bloody drunken companion.

“It is generally accepted that divine service affords a legitimate opportunity for the congregation to assess not only the appearance, deportment, elegance, and possible wealth of new arrivals to the parish, but the demeanour of any of their neighbours known to be in an interesting situation…A brutal murder on one’s own property…will produce a large congregation, including some well-known invalids whose prolonged indisposition had prohibited them from the rigours of church attendance for many years.”

James mentions that a few of the jurors during the trial testimony of the accused murderer seem to have dozed off; you might feel the same – until James jolts you back into the action with another dead body, and has you fastracking to the whodunit – with a few embellishments before the drama is over.

An Agatha Christie mystery with last-minute revelations in Jane Austen language, Death at Pemberley is an easy fun read, with so many references to Pride and Prejudice that you won’t mind tripping over a few dead bodies.