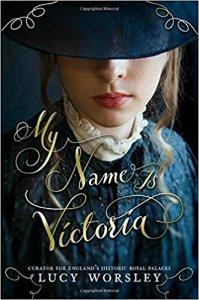 Lucy Worsley describes herself “by day Chief Curator at Historic Royal Palaces, and by night a writer of history books.” I first met her as the narrator of a BBC documentary about the wives of Henry VIII as she whispered commentary behind the scenes of the royal trysts.  Dressed as a maid servant in the series, her short blonde bob and posh accent gave her an air of the friendly yet knowledgable expert in British royal history.  With PBS Masterpiece Theater about to launch the third season of “Victoria,” her children’s book about an overlooked chapter in Queen Victoria’s young life is tantalizing.

As I read, I checked Worsley’s facts.  She didn’t make it all up; her historical novel fictionalizes a relationship between young Victoria and John Conroy’s daughter that did exist, and marks the introduction of Victoria’s beloved spaniel Dash into court life.

Kensington Palace may hold the upscale apartments of Princes William and Harry today, but Victoria felt trapped inside its dreary walls when she was a young girl, waiting to be queen.  John Conroy, the villain Irish comptroller and lover to her mother the Duchess of Kent, imposes rules restricting Victoria’s access and keeping her under constant guard, not only to keep her safe from her relatives who would kill her to get themselves closer to the throne but also to control her.  To offer some respite from the hostile environment of his Kensington System, Conroy brings his young daughter and her dog Dash to live as companions and playmates.  His daughter, Miss V, also named Victoria is also expected to spy on the young princess.

Historical references to Queen Victoria’s diaries have Miss V as a despised and suspicious tool of her father, but Worsley discounts those descriptions and has the two girls as friends growing up together.  The famous dolls are featured as are Victoria’s temper tantrums and her resistance to handing over regency power to the ambitious Sir John.  Handsome Prince Albert makes an appearance later in the book.

Worsely deftly educates the reader while offering some tantalizing possibilities about Victoria’s personality.  Her surprise ending actually has some creditability, feeding on the nineteenth century rumor of Victoria’s illegitimacy noted in A.N. Wilson’s biography Victoria: A Life.   It was still a surprise,and I loved it.

Never again will readers think of Queen Victoria as the overweight matron in black.  Worsley reminds us – like everyone who grows old, she once had a life.

Without a time machine, historical inaccuracies about personal lives are hard to prove, and the practice of selecting only the best for posterity sometimes shades perception. Jane Austen’s sister conveniently burned the famous author’s diaries; Jacqueline Kennedy famously engineered the Camelot legacy through Theodore White; biographer Julia Baird notes “Victoria’s daughter Beatrice transcribed her mother’s journals and edited out everything that seemed to reflect poorly on her, then burned the originals.”

Until Julian Fellowes created the  movie “Young Victoria” in 2009, most readers thought of Queen Victoria as the short, heavy, frumpy monarch in black who made infrequent appearances.  Although history notes Victoria had nine children, her romantic inclinations and Albert’s courting of the young queen were usually overwhelmed by her later years.  Berated by the royal family for inserting inaccurate scenes to increase the drama – Prince Albert never really took a bullet for Victoria – Fellowes never blinked as he introduced a new look for Victoria and went on to create Downton Abbey the following year.

A new Masterpiece Theater series on the Public Broadcasting System promises more of the younger queen, and author Daisy Goodwin – creator and writer of the series – offers a glimpse with her new novel Victoria.  Goodwin begins the book with the sixteen year old hoping her uncle, the king, will live to her eighteenth birthday, so she can rule without a regent, most probably her estranged mother.  She gets her wish, becoming queen soon after she comes of age.

Goodwin elaborates on a few vague historical tidbits to provide drama and interest – embellishing the young queen’s infatuation with her prime minister and capitalizing on her accusation of Lady Flora Hastings as a catalyst in her waning popularity.

Though fictional, Goodwin manages to tear away the historical image of a prudish moralistic matron to reveal Victoria as human after all.  Descriptions of her early insecurities about her appearance, her fiercely independent determination, along with happy moments with her little dog and carefree rides on her horse – all transform an icon into flesh and blood.  Amazingly, knowing Victoria and Albert will eventually marry does not detract from the breathless anticipation as Goodwin concludes the novel with Victoria’s proposal.

Goodwin’s Victoria is an easy digestible history lesson, with added spice.  Like her novels The American Heiress and The Fortune Hunter, Goodwin’s Victoria immerses the reader in the world of the heroine, and, if all the facts are not exactly correct – as Julian Fellowes says, “What does it matter?”

Like catching up on past seasons of Downton Abbey, Fay Weldon’s trilogy focusing on the Edwardian lifestyle of the British is best enjoyed in sequence, without too much waiting in between.  I finished reading Habits of the House, the first in the series, to meet Lord Robert, Earl of Dilberne and related characters who could be the cast of Downton, with only  Maggie Smith’s Dowager Duchess absent; then quickly moved on to Long Live the King, to attend the coronation of Queen Victoria’s heir, Edward, the new king and a friend of the

family.  The publication of the last book in the series – The New Countess – will be in December, with the possibility of a Dowager Dutchess finally in residence.   Downton Abbey, Season 4 begins in January – perfect timing.

The grand Edwardian lifestyle is in jeopardy, and only a marriage with a wealthy American looking for a title can save the British aristocrats from losing the estate, the horses, the servants, and everything else – and modernization lurks in the wings.  Sound familiar?  Fay Weldon, the creator of the beloved “Upstairs Downstairs” series, uses wry humor to poke at the sensibilities and politics of the privileged as well those “in service.”  At times, the lines are blurred and the lady’s maid can be more adamant in maintaining the class structure than the lady of the house. Nonetheless, Weldon carefully inserts her ongoing commentary on the strained politics (Churchill was just a start-up then), as she quietly ridicules the narrow-minded attitudes that can be as rigid as the whale-boned corsets of the times.

The historical references are instructive, and I found myself looking up the Boers War, Queen Victoria’s John Brown, the Vanderbilt connection, and, of course, the succession chart.  In the first two books, the Earl and his family carry on to the early 1900s, with changes in fashion, lifestyle, and politics.  The gossip, however, remains the sustaining and stabilizing force in the stories, along with those wonderfully convenient soap opera scenarios that twist the plot lines: a beautiful young girl saved from a fire becomes a princess instead of a nun and saves the King.

With a little bit of luck and a lot of good writing, all ends well in each of the first two books.  My expectations are high for the third book; if you are a fan waiting for the next season of Downton Abbey, Weldon’s trilogy will sustain you.

With a long title that assumes you would not know who Prince Philip is without his famous connection – Philip Eade’s biography of Prince Philip’s early years cleverly focuses on the man’s foundations – from his grandparents to his marriage to a young British princess.  I downloaded the Kindle sample for Prince Philip: The Turbulent Early Life of the Man Who Married Queen Elizabeth II.  Unfortunately, the extensive family trees of the “The Houses of Windsor, Hesse, and Battenberg” (his mother’s side) and the “House of Greece” (father’s side) were too small to study.  Undeterred by the various houses of kings, princes, and dukes across Europe that rival Catherine of Russia, I started my own cheat sheet to keep the royals straight; basically, they are all related – with Queen Victoria starting all the interconnections.

Prince Philip has always seemed an austere snob – almost grumpy at times as he followed the requisite steps behind the Queen, but Eade’s book could “rebrand” his image.   Philip’s young life was tragic, brave, “turbulent,” sometimes with wartime suspense; his mother was deaf and his father abandoned him when he was eight years old.  Eade writes the biography with the flavor of historical fiction.

When the sample stopped, I bought the book and am now slowly falling under the spell of the tall young blond German who was a Prince of Greece as well as a Mountbatten of England.

Seems he really was the dashing prince charming when Elizabeth fell for him.

Before the public relations geniuses were spinning news, the master promoter P.T. Barnum, the self-ascribed “Prince of Humbug” was convincing audiences that he had what they wanted to see.  In The Autobiography of Mrs. Tom Thumb, Melanie Benjamin uses the historical backdrop of the nineteenth century and the drama of the Civil War to resurrect one of Barnum’s most famous acts – General Tom Thumb and his wife – together, a total of a little more than five feet of entertainment.

Lavinia (Vinnie) Warren Bump had a life before the circus – she was a school teacher at age 17, but longed for more than the sheltered life her parents were prepared to give her on the farm.  Hearing of how Barnum had made Jenny Lind famous, Vinnie contacted him – after a short stint on a riverboat sideshow – expecting her talents in song and dance to make her fortune.   Benjamin uses Vinnie’s voice to reenact her struggle to become noticed for something other than her size. 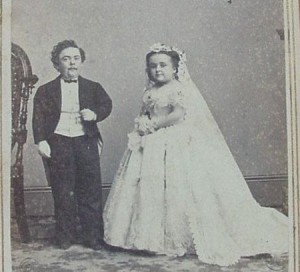 Barnum as a two foot boy at age five, taught “to smoke at seven, to chew tobacco at nine…”  Seeing an opportunity to create another act, Barnum encouraged the courtship and General and Mrs. Tom Thumb became the new tour attraction.

As Vinnie tells her story, Barnum has an imposing influence over her and everyone else in her life.  Drawing from the real Lavinia’s diaries, Benjamin notes that her sources list dates and events, but Vinnie

“doesn’t discuss her feelings…she never shares any disappointments, any frustrations…The challenge was always to separate the humbug from the truth”

So, Benjamin creates them for her; Barnum becomes the unrequited love of Vinnie’s life, and Mrs. Tom Thumb becomes, under Benjamin’s pen, a feisty, adventurous, and determined woman – and the marriage – just part of the act.  Later, her sister (even smaller in stature) joins the group, leading to a tragic (and true) turn in the tale when she dies in childbirth.

Throughout the story, Benjamin inserts the Civil War as it is happening; her short blurbs introducing each chapter, a reminder of the times and a cruel counterbalance to the world of Barnum.   Queen Victoria and President Lincoln carry on with the reality while Barnum sustains the fantasy.   At times, Benjamin’s first person narrative seems stilted, with the dialogue needing more realism and less perfunctory chatting – and I often skipped over it.

If you can work through the excessive minutia (pardon the pun), The Autobiography of Mrs. Tom Thumb offers a unique perspective on the era and a sympathetic view of a vulnerable woman.