Some book clubs are getting organized for next year with reading lists. Others prefer to make decisions monthly, targeting newer books. Whatever your preference, lists of books are always a good way to reevaluate your own reading and sometimes provide new ideas for good reads.

The Honolulu Museum of Art cleverly connects books with their art collection, with the discussion led by a knowledgable docent, followed by a tour of the art. The books on their list for the next two months include:

I have had Circe in my ebook collection since it was published.  This might be a good time to finally read it.

Celebrities like to promote book lists and sometimes offer online book club discussions.  I try to avoid Oprah’s suggestions, but I do like picks from Reese Witherspoon.  Her November selection is Jojo Moyes’ The Giver of Stars. Other books on her list include:

My local book club has its list for next year:

And my favorite book club has Ann Patchett’s The Dutch House next on the agenda.

What is your group reading?

Reese Witherspoon’s book club pick – Something in the Water – has me wondering when she will produce it for viewing. Catherine Steadman’s book has all the elements of a great series – exotic settings, unreliable characters, and plot twists favoring the female leads.

I listened to Steadman’s British tones reading the book for Audible and it was hard to not keep going into the night. The “something in the water” was not what I had expected and the hints of espionage and financial fraud added to the suspense.

Erin, a documentary producer, and Mark, an out of work hedge fund expert, go off on their honeymoon to Bora Bora. Mark, an expert diver, convinces Erin to overcome her fears to experience the beautiful underwater world. His cavalier comments about the sharks in the water had me suspicious, but what they find leads the adventure into murky waters as each plot twist combines danger and a new life for both.

Great fun to listen to. 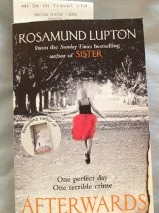 How many books do you buy, shelve, and forget about? When I’d bought Rosamund Lupton’s Afterwards in Heathrow Airport in December, I was so excited to get a book four months before it would be published in the United States. Her first book – Sister – had me locked into reading in one night. But I got distracted, and now with the hardback available in American bookstores, I am finally opening the British paperback, months later – using my sales receipt from Heathrow as a bookmark. 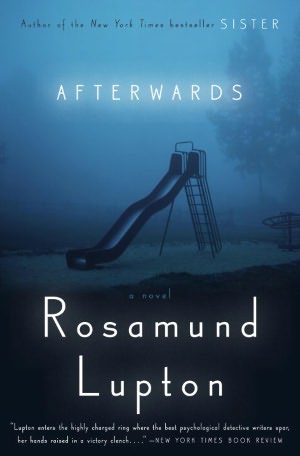 As I read, I noticed the British flavor in the language – a character described as a jolly-hockey-sticks Sloane in FUN shirts (long sleeves a different pattern to the rest); reference to “a spot-on present”; and, of course “Mum” instead of Mom. I wondered if an editor changed words for the American publication as for the cover, which was eerily different.

The device Lupton uses to tell the story reminded me of the movie, “Just Like Heaven,” with Reese Witherspoon’s character flitting about uncovering clues, while her body lay comatose in the hospital. Lupton uses two roving spirits to uncover clues to the mystery of who set the lethal fire to the schoolhouse – Grace, the literate Cambridge educated part-time news reporter, and her daughter Jenni, a creative seventeen year old who probably will not pass the entrance exams.

On sports day, when the children, including Grace’s son, eight year old Adam, are out on the field, an arsonist burns down the school.  Grace tries to rescue her daughter, who is working as the school nurse for the day, but they both are badly hurt and lie comatose in the hospital.  Their spirits, however, reconnect outside their bodies, roaming the halls, listening to doctors and family discuss their fate, and following possible murderers around the halls and into the neighborhood.  Although the premise is far-fetched, the conversations between mother and daughter are as normal as if they were alive, as they become a detective team to solve the whodunit.

An easy read, with enough suspense to keep the plot moving, Afterwards has as many family relationship issues as mystery, but Lupton is expert at throwing red herrings, and the culprit is not obvious until the end of the story.  The end is thrilling but be sure to have some tissues handy.

Should the mad ramblings of a blogger be picked up for a book, a movie, a guest shot on the Today show (too late for Oprah)?  It has happened, after all  – from blog to book success.  All that’s needed is a good idea – something different, creative, innovative.

Ree Drummond found the pot of gold on a fantasy ranch, with her Marlboro Man and her cookbook – The Pioneer Woman Cooks   –  but Amanda Fortini’s New Yorker article – O Pioneer Woman – does not forgive Drummond’s switch from blogging for a connection to readers to her sharing her life for profit.  One of the most successful bloggers on the web, 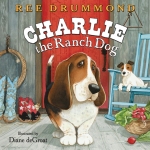 left the ranch, the children, and the man behind, to tour in luxury as she promotes her memoir, Black Heels to Tractor Wheels, (soon to be a movie with Reese Witherspoon), and her children’s book, Charlie the Ranch Dog.  But it’s not the books that have given Fortini a sour taste; it’s Drummond’s decision to blatantly recommend products that pay to advertise on her site.

Whenever I brought up the subject of ad revenue, Drummond grew acutely uncomfortable…revenue for 2010 was ‘solidly one million dollars’ … not including book advances, royalties, and the movie option.

If her discriminating readers know, they don’t seem to mind.  Fortini says, “She is who her readers would be if they had more time, more money…” Her popular blog keeps offering recipes, pictures of dogs and children, and now the road trip.  The site is slick – not the work of an amateur blogger (she has hired a web development firm to host and manage the site), and the ads are subliminal.  It’s all about perception, isn’t it?

Check it out for yourself at the pioneer woman blog.  If you like her stylin’ on the blog, you’ll probably like her books. 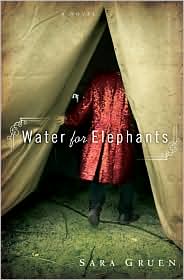 I read this wonder of a book when it first came out and recommended it to everyone – but I only remembered the elephant who understood a foreign language and the ending – one to aspire to.  Since then, I’ve read Sara Gruen’s latest book, Ape House, and have been recommending that one too.

The movie brought it all back, with Hal Holbrook playing the old vet who tells his story. The flashback takes up most of the movie, as it did in the book, with grand circus scenes, smoldering love connections, and terrifyingly brutal cruelty.  After his parents die in a car crash, Jacob Jankowski forgoes finishing his veterinary degree and joins the circus. His skills with animals become apparent, and he becomes the unofficial vet to the circus menagerie.

Set during the Depression, the circus is struggling and buys Rosie,  the elephant, who 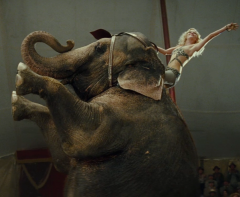 cannot seem to follow the simplest directions.  Once the language barrier has been crossed, Jacob teaches the elephant so well that she takes center ring and saves the circus.  The menagerie director (the circus owner in the movie) abuses the elephant as well as his wife, eventually losing both to the handsome vet.

The elephant is the star of the movie, but, it’s the ending – the same in both the book and the movie – when the story returns to the old man – that will always be my favorite part.  Who wouldn’t want to join the circus?

Read a review of another Sara Gruen book: Ape House