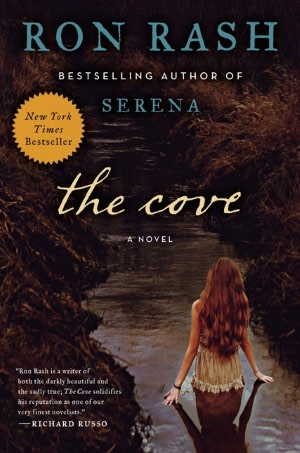 Ron Rash offers a tale of misery, poverty, backwoods superstition, mystery, and romance – encased in a slow-moving Southern Gothic tale set in Appalachia at the end of World War I in The Cove.  Although the story is stretched into novel length, the plot is secondary to the descriptive language and the characters’ struggles to survive.

The story opens with a Tennessee Valley Authority inspector finding a skull in an old well, just before the cove will be buried under the water of the new dam.  After this teaser, the narrative reverts to 1917 and slowly unravels around the lives of the three main characters in the gloomy cove.  Laurel and Hank Shelton barely manage to sustain a life on their farm after their parents’ death.  Although Laurel had the potential to become a teacher, she dropped out of school to nurse her ailing father; her purple birthmark labels her a witch with the local community, and her life is isolated and lonely.  Hank has returned from the war a hero who is missing a hand, and hopes to eventually start his own family – away from the cove.

Walter finishes the triangle.  When Laurel finds him comatose in the woods from bee stings, she nurses him back to health, and hopes he is the answer to her yearning.  Walter, who is mute and plays the flute, has a shady past – Rash cleverly hints at prison, wanted posters, and the Germans.  When Laurel discovers his identity, the pace of the story changes. 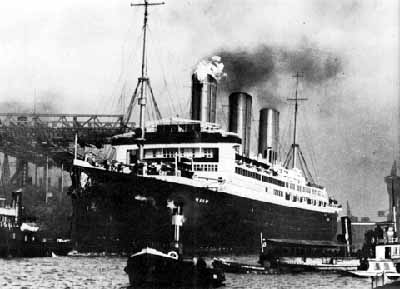 The war and the local community’s prejudice and fears play an important role in the story. Chauncey Feith, the cowardly wealthy army recruiter, who inspects the library stacks for subversive books and harasses the college German professor, feeds the bias of the local folk with suspicion and innuendo. Rash uses historically accurate references with the inclusion of the German luxury cruise liner, Vaterland, marooned in America when war was declared, and later converted to the American warship Leviathan.

“The ‘Vaterland’ band played jolly shoreside concerts in order to raise funds for the German relief effort, and such Anglophobes as William Randolph Hearst attended charity balls on board and donated generously.”  … excerpt from The Great Liners

Walter’s secret is the key to the mystery, and the ending is startling.  But if you like your mysteries fast-paced with clear clues, the solution may not come fast enough.  Ron Rash, a professor of Appalachian Cultural Studies, has a style that has been compared to Steinbeck and Cormac McCarthy. The poetic journey and the cadence of the language carries the reader into the desperate lives.  It took me a while to get into the rhythm, but once I did, I was anxious to find out if my speculation was correct.  I was still surprised at the end – and glad I had persevered.

Whenever I read a promising review – usually in the New York Times or Washington Post – I immediately log onto my library site to order the book.  Inevitably, the library system does not yet have the book catalogued – or maybe even purchased.  So, I add the book to my list and promptly forget about it.

I have a friend who places his list next to his computer and checks into the library every day until he captures a place – usually the first or second in the queue.  By the time I remember to check, I am usually 50 or 60 on the waiting list;  popular “hot picks” sometimes place me at 273.  Of course, I could always buy the book, but what fun is there in that?

April has 4 new books I want to read.  And the library has yet to list them.  Maybe this will help me remember to keep checking.  If you get there first, please read fast and return the book for me.