Valerie Martin combines historical fact with a believable premise in her fictional tale – The Ghost of the Mary Celeste.  If you are not aware of the mystery surrounding the sinking of the nineteenth century ship or of Arthur Conan Doyle’s penchant for spiritualism, Martin’s complicated story can be hard to follow at first.

After I googled both the famous Conan Doyle, creator of Sherlock Holmes, and his relationship to the Mary Celeste – and noted the dates on Martin’s sections – I started the book again and this time became immersed in the disjointed narrative.  The story is based on the discovery near the Azores of an abandoned ship, the Mary ­Celeste.  The  cargo and crew’s possessions were all intact, yet everyone was missing, creating speculation that ranged from insurance fraud to foul play.  The incident inspired one of Arthur Conan Doyle’s first published pieces of fiction, “J. Habakuk Jephson’s Statement,” printed anonymously in the British journal Cornhill.  In his short story, Conan Doyle fictitiously solves the mystery of the missing ship; some readers believe Doyle’s story to be true, forgetting it is fiction.   With this premise, Martin weaves a tale that seems real, and challenges the premise of the truthfulness of the printed word.

Martin’s story begins with a ship sinking – all hands lost – and appearance of the ghost of the Captain’s wife to her young cousin, who has a talent for hearing the voices of the dead.  Later, the young girl’s sister, Sallie, on board with her captain husband, is lost at sea on the Mary Celeste.  Arthur Conan Doyle appears briefly, at first, with references to his medical background, and cameo appearances of his writing contemporaries – Robert Louis Stevenson and James Barrie.  The story bounces around a series of seemingly unconnected stories, with deaths at sea, Doyle’s continued success as the author of Sherlock Holmes, and the reappearance of the young cousin, now a famous woman psychic, calling herself Violet Petra, who is described in a memoir written by Phoebe Grant, a female journalist who specializes in exposing frauds.

Eventually, Arthur Conan Doyle’s interest in Spiritualism, the female journalist’s mission, and the aging Violet connect – and collide – to create a satisfying mystery that circles back to solving the mystery of the Mary Celeste.  Although Martin seems to be noting the gullibility of readers to believe whatever they read, her subtext never detracts from the adventure of solving the mystery.  During the intervening years, Doyle creates and kills off Sherlock Holmes, noting that he “really was never alive in the first place,” when ardent readers lobby for the sleuth’s return in story form.  How vested we readers become in the characters created for us – they may be as real as they are to their creators, the authors.  With this as a hook, Martin happily leads the reader through a series of twists, red herrings, and possible solutions in a story that requires attention until the final section, which reveals the log of the Mary Celeste itself, delivered into Conan Doyle’s own hands.

” ‘Was it simply another hoax,’ Conan Doyle asks himself,  ‘the desperate ploy of a poor, ambitious young writer, just as he had been, who schemed, just as he had schemed, to captivate the fickle attention of the public?’ “

If you are planning to read this book to lull you to sleep, you may lose one of the threads.  Stay with it and you will still wonder where it went in the end.  The questions – What happened on the Mary Celeste? Is Violet Petra a genuine psychic or a fraud? – can only be answered by the reader.   Valerie Martin is not revealing anything, but she does create a rewarding and suspenseful tale.

An innocent man was convicted of terrible crimes in Staffordshire in 1903, and Julian Barnes, recently awarded the Man Booker prize for The Sense of an Ending, uses the famous British Great Wyrley case as the basis for his historical fiction – Arthur and George.  Arthur is the well-known author of the Sherlock Holmes mysteries, Arthur Conan Doyle, who investigated the case; George is George Edalji, wrongly accused and convicted.

Barnes divides his story into four sections,   alternating between Arthur and George as he tells their backstories.  As George grows up financially comfortable in the Vicarage, dutiful to his father’s religious upbringing, Arthur scrounges for survival and plans how he will secure his family’s well-being after his drunken father is confined to an insane asylum.  Both boys grow into acceptable Englishmen – George, a lawyer, and Arthur, a medical doctor who writes detective stories for extra money.

The story seems slow and uneventful until George’s heritage is revealed and his family is threatened by strange annoyances  – deliveries of goods they had not ordered, postings in the local newspaper for the sale of the Vicarage, and  letters to the police falsely accusing the family of crimes.   George’s mother is from Scotland but his father, the Vicar, is Parsee from India.  The specter of racism lurks throughout the story as does George’s feelings of superiority.

When horses are found gutted in local fields, anonymous letters name George as the villain, and he is tried for the crimes of mutilating farm animals.  The cross-examination is based on hearsay and perception, but George is sentenced to seven years in prison.   George has read The Hound of the Baskervilles while awaiting trial, but the two men have not yet met. 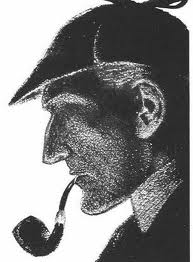 Barnes flips to Arthur’s story, fleshing out the familiar pieces of Doyle’s personal life – his wife’s long illness, service in the Boer War,  knighthood, his relationship with his mother and his long-standing celibate love affair with Jean Leckie, his disdain and resurrection of the popular Sherlock Holmes stories, and, of course, his interest and belief in Spiritualism.   Barnes offers a slowly detailed humanization of the man many only know through his fictional characters or recent popular movies.

After over 225 pages, Arthur and George finally connect, when George appeals to Arthur to investigate his case.  Looking for relief from his despondence over his wife’s death after a prolonged illness, Arthur, now famous as the creator of Sherlock Holmes, meets with George and by his powers of deduction knows at once that George is innocent.

“They’ll rue the day they let this happen to an innocent man.”

Of course Arthur cracks the case, discovers the weapon,  suspects who committed the atrocities, and proves that George could not have been the offender.  Barnes stays close to the real 1900s case – George is exonerated, reinstated as a solicitor, and as a result of Doyle’s efforts,  the Court of Criminal Appeals was established in Britain – but the real criminal was never uncovered.

Although the case is solved, this book is more literary than mystery – the story secondary to the language.  Barnes methodically crafts images and thoughts, revealing his characters slowly.  He is more interested in the minds of the two men – these “unofficial Englishmen” –  than what they did.  When he does use dialogue, however, the conversations are crisp and pointed, moving the stalled plot.  If you like British flavoring with your reading – like Gardam’s Old Filth – you will appreciate the nuances and clever civilized remarks.

The ending fast forwards to Arthur’s death and a subsequent séance where Arthur supposedly speaks to his mourners through his favorite Medium – giving Barnes an opportunity to demonstrate Arthur’s interest in the occult in his later years.    George’s life in old age is as expected – he really has not changed his “stolid” outlook of life.   Included in his end notes, Barnes confirms that he has followed and documented the actual occurrences – sometimes the real story is just waiting to be told.

Arthur and George was shortlisted for the Man Booker Prize in 2005, but I would not have looked for it had Barnes not won this year.  Since I was not familiar with the real case or with Arthur Conan Doyle’s participation, the plot held some intrigue for me, but   the story was secondary to how it was told.