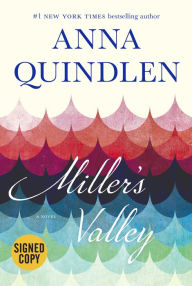 Where did you grow up?  Is your childhood home still there with all its memories?  What if it were gone forever?  With the sixties as her timeframe and a small farming town two hours outside of Philadelphia as the setting, Anna Quindlen creates an unforgettable family in Miller’s Valley with a story of lives connected to both time and place.

The story follows the journey of the narrator, Mimi Miller, as she grows from a bright eleven year old who sells corn at a small stand outside her family farm to scholarship student at the University of Pennsylvania, and eventually, a medical doctor who returns to her hometown.  Her mother, a nurse, stabilizes the family with her income and her wisdom; her father, whose family has held the farm for two hundred years, is a stoic man who can fix anything from broken radios to the old sump pump in the basement; her older brothers split into Tommy, the appealing black sheep who goes off to fight in the Vietnam war and returns broken, and Eddie, the steady and boring  brother who grows up to capitalize on the destruction of the land.  Peripheral to the family core but just as important to the theme are others: Aunt Ruth, an agoraphobic with a secret, who never leaves the small house next door, and Steve, Mimi’s boyfriend.

Quindlen’s main characters are ripe and deep, and you will remember them and wonder about them long after the story is over.

The villain is the government, personified by a slick developer, who is pressuring farmers and town folk to leave to make way for a government sponsored dam and reservoir, surrounded by new patchwork housing.  Clearly, some are happy to sell – including Mimi’s mother – while others, including Mimi’s father, dig in to preserve their heritage.  Mimi is scared of what the future holds but it seems there is no stopping progress – or the government.

I wondered about the historical accuracy of the story; is there a town and a farm under water in Pennsylvania because of a dam realized through government intervention and industry?  The closest I could get is Codorus State Park and Lake Marburg in York County – both the timeframe and the location fit:

The creation Codorus State Park is tied to a cooperative effort between private enterprise and state and local government. The borough of Spring Grove and the P.H. Glatfelter Company worked together to dam Codorus Creek. The purpose of the dam was to provide drinking water for Spring Grove and to meet the industrial needs of the paper plant owned by the P.H. Glatfelter Company in the borough…a park was created on the shores of the newly made Lake Marburg.[1]

Lake Marburg gets its name from the small community of Marburg, home of a handful of buildings – including a farmstead – that was flooded in December 1966, when Codorus Creek was dammed. The land for the park was acquired as part of the Project 70 Land Acquisition and Borrowing Act, with the governor approving the acquisition on December 10, 1964.  Underwater Ghost Town

Quindlen is one of my favorite authors; I have a few of her books on my shelf – just cannot part with them.  I’ve quoted from her memoir – Lots of Candles, Plenty of Cake – but I was happy to see another of her novels and anxiously pre-ordered it.  Although the historical aspects are informative, the message of hearth and home – and where it is – left me with a disturbing as well as comforting feeling.  As someone who is displaced, and still misses the place I called home – although it is not underwater and remains the same as when my children skated on the nearby pond –  I can relate to the last paragraph of the novel:

“I never go over that way…But every couple of years I have a dream.  I dive down into green water and I use my arms to push myself far below the surface and when I open my eyes there are barn roofs and old fences…But I swim in the opposite direction, back toward the light, because I have to come up for air.  I still need to breath.”

Life goes on, wherever you are, as long as you can keep breathing…

My Reviews of Quindlen Books: 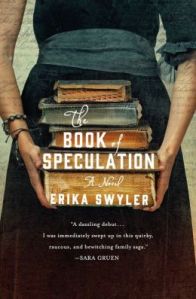 When a librarian receives a rare old book from a stranger in Erika Swyler’s The Book of Speculation, he discovers a door into his past, leading to a world of carnival performers with mysterious secrets.

Simon Watson’s life is disintegrating: his job as a research librarian in a small New England town is eliminated through budget cuts and his childhood waterfront home is falling apart from years of disrepair. The book – bought on spec by an antique book dealer, hence the name – becomes his source for researching his family line.  The story connects the lives and history of three families affiliated with a nineteenth century traveling carnival – the carnival overseer; the mysterious Russian fortune-teller; and the underwater mermaids of Simon’s heritage through his mother, grandmother, and great-grandmother.  Unraveling who has grown into the present-day characters offers more speculation – until Swyler reveals all in the end.

The story flips back and forth from Simon’s present to the past.  The history of traveling carnivals with freak sideshows offers a vivid description of the hard life on the road in the early nineteenth century, and a glimpse into the lives of the performers.  At times, however, the story swerves into strange territory with a young tattooed man who can turn on lights with his touch, a deck of tarot cards infused with mystical powers, and a curse causing the breath-holding women to cause floods and abnormal tides, before they all die at a young age.   Simon’s pain-staking task of finding his heritage leads to a bizarre family tree and an extramarital affair that seems contrived to explain away a strange childhood.

Nevertheless, I enjoyed the easy flow of the story, the magical possibilities, and the outlandish explanations.  If you are a fan of  The Night Circus, The Golem and the Jinni, and other books with a mix of other worldliness and family drama, Swyler’s book will fix you under its spell.