A local book club’s pick of Ann Patchett’s State of Wonder led me to rereading Joseph Conrad’s Heart of Darkness. The similarities are hard to miss: the menacing jungle (Africa for Conrad, Brazil for Patchett); the main character who manipulates the ignorant natives ( Kurtz vs Dr. Swenson); the ruthless, greedy corporation willing to destroy a way of life in the name of progress (ivory merchants in Africa; pharmaceutical companies in Brazil).

Both authors use brutal realism, with Patchett offering some respite in romance, while Conrad mires in the worst of humanity. Both use their talents for phrasing to capture the reader.

“Marina brushed her hand across the back of her neck and dislodged something with a hard shell. She had learned in time to brush instead of slap as slapping only served to pump the entire contents of the insect which was doubtlessly already burrowed into the skin with some entomological protuberance, straight into the bloodstream.”  Patchett, State of Wonder 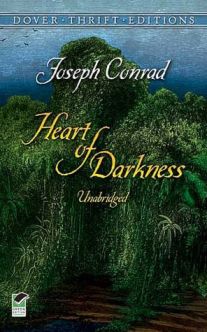 “I tried to break the spell–the heavy, mute spell of the wilderness–that seemed to draw him to its pitiless breast by the awakening of forgotten and brutal instincts, by the memory of gratified and monstrous passions. This alone, I was convinced, had driven him out to the edge of the forest, to the bush, towards the gleam of fires, the throb of drums, the drone of weird incantations; this alone had beguiled his unlawful soul beyond the bounds of permitted aspirations.”
Conrad, Heart of Darkness

Conrad wrote his cautionary tale over 100 years ago (1903). Not much has changed it seems, just the players and the place, continuing the universal themes of greed and ethics.

If you haven’t yet read State of Wonder, the review here might tempt you. The classic Heart of Darkness is available free online.

Reading all these books before the new year may be an overly ambitious undertaking, but at least consider them as part of your New Year’s resolutions.

They were among my favorite reads this year.

One of the book groups I follow allows the host to choose the book of the month; no rejections allowed.  Deciding which books to read and discuss a year in advance can be daunting, especially if the intent is to interest as many readers as possible.

Always looking for new ideas for books to read, I like lists of books.  And, if I’ve read many of them – all the better to look forward to revisiting a favorite story.  Here is their list for next year; click on the books in red to read my review.

Just like fashion that recycles back if given enough time – you didn’t throw away those bellbottoms, did you? – small bookstores are making a comeback.  Author Ann Patchett suggests that bookstores may go in cycles – like the cicadas, that buggy scourge

that returns very 13 or 17 years, with their shrill sound, falling out of trees onto unsuspecting children’s backpacks as they walk home – adding more shrill screaming. Patchett’s reassuring essay confirms that those small independent bookstores are still here – and maybe better for the departure of their larger competitors.  In her essay for the New York Times, Of Bugs and Books, Patchett recalls her recent book tour for her new novel, The State of Wonder.

Patchett visited some familiar names: Powell’s in Portland and Prose and Politics in Washington, D.C., and more – all doing well.  As a mark of her faith, she is opening her own bookstore – Parnasus Books – in her hometown of Nashville.

Maybe Patchett will ask her visitors to follow the habit of patrons at Frank Shay’s bookstore in Greenwich Village, open for business from 1920 – 1925, and have users sign her door.  Shay’s bookstore door just resurfaced in an exhibit at the Harry Ransom Center in Texas, displaying famous signatures on both sides of the door: Theodore Dreiser, John Dos Passos, and Sherwood Anderson, among other authors who liked to browse there.  Jennifer Schuessler’s essay  for the New York Times Sunday Book Review noted that Christopher Morley wrote about the small bookstore’s closing…

“It was too personal, too enchanting… to survive indefinitely.”

But, maybe the time for small enchanting bookstores is back.

A friend and reader recently suggested that I offer a rating system with my posts.  I do try to give a clue in the last paragraph about how I feel about the book, but rating is tricky.  I think most books are likeable – and someone will like a book – whether or not I do.  Other books no one will like – even if I rave over it.

But – the rating system might be worth a try.  Here are a few of my latest reads with my ratings, just in case you didn’t detect my sly innuendo in the review.

My Ratings on Recent Reads:

Let me know if you agree with my assessments – and what you think of the rating system.