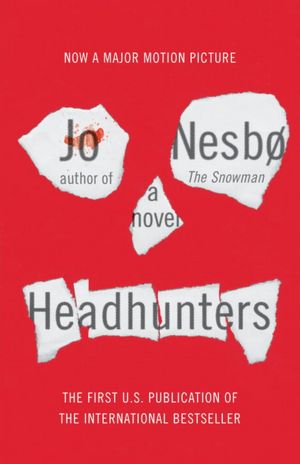 I’m reading Jo Nesbø’s Headhunters – a crime thriller about a suave Norwegian headhunter, Roger Brown, who moonlights as an art thief to supplement his income and fund his expensive life style.  Using information he accesses through interviews of prospective clients, Brown breaks into their houses to steal their art.  He’s successful until he meets Clas Greve, who owns a priceless Rubens.   The steady civilized plot suddenly explodes when Brown finds something (no spoiler here) under Greve’s bed, and his life changes into a series of shock waves.

Although the book was first published in Norway in 2008, it was not available in the United States until 2011.  Dubbed the new Stieg Larsson (The Girl with the Dragon Tattoo), Nesbø offers suspense and surprising plot twists.

So far, I’m happily reading into the night – skipping over the disgusting outhouse scene.  Having just read his children’s book, Doctor Proctor’s Fart Powder, I wonder if Nesbø  has thought of any escapes other than through feces – yuck.

Read reviews of other books by Nesbø:

Although I live in a climate where no snowman could survive – unless he were made of shave ice – Jo Nesbø’s  tale of a serial killer in The Snowman is so real, I keep looking for one to pop up.

Harry Hole, the Norwegian police detective, has a mold problem in his apartment, and I’m wondering if this has anything to do with the cold-blooded murderer he is tracking. Of course, the killer has sent him a note too – a clue that will lead to the Snowman.

With his intrepid team, Harry pursues the killer, as more body parts – and snowmen – appear in the cold Norwegian landscape at each new snowfall; one shows up in a freezer; another on an ice rink. The deadly pursuit keeps going, and sometimes it’s hard to keep all the victims and suspects straight.  One of my favorite characters is Tresko- the poker-player with the terrible foot odor – tåfis (literally means toe fish, but Harry Hole calls it toe-fart), who spots the liar’s “tells” by observing the potential killer on TV.

“What separates the best from the rest is the ability to read others.”

Every time I think it’s over, it’s not, and the story has another exciting twist.  The killer is evil with a vendetta  – and the suspense is killing me.

Although this tale is from Norway, the gruesome details resemble Swedish writer

Stieg Larsson’s The Girl With the Dragon Tattoo series, but  Harry Hole has been around in Jo Nesbø’s fiction since 1997.  This was my first encounter with the Oslo investigator, but five others preceded The Snowman – with the next in this exciting series already translated and ready for release – The Leopard.

The signs were too much to ignore – two weeks in a row in the Sunday Times; recommendations from friends who had already read the first two;  and besides, I had a half-off coupon.   So, I gave in and bought the latest Stieg Larsson – The Girl Who Kicked the Hornet’s Nest.  Why not first read the The Girl with the Dragon Tattoo (it’s already a movie) and The Girl Who Played with Fire?

Nah, might as well get the one that’s hot off the press.    My verdict?

Larsson provides all the ingredients for a good crime thriller – with the flavoring of Swedish government insiders, a Swedish writer with an investigative flair, and “the girl”  with a talent  like no other you’ve encountered.    No matter that I hadn’t read the first two books, like any good writer of sequels, Larssen provides the background – a little tedious but necessary.   You’ll appreciate it even if you’ve been a follower – hard to keep all the similar sounding Swedish “B” names straight.

The foreign flavor with the aura of lethal agents and Russian spy rings, along with the shared vision of incompetence in higher level administrators (the Peter principle evidently is international), made me want to have cheese with buttered bread for breakfast.   The journalistic asides were not compelling, and the explanations tended to drag on, but when Larsson concentrated on the action, I was hooked.

Needless to say, it’s been reviewed and anticipated up and down the literary scene, so if you need a good review to further whet your appetite, try David Kamp’s in the New York Times…
http://www.nytimes.com/pages/books/review/index.html

Tired of working?  Write a book, make a million or two, and retire.    Just be sure you don’t die first, but for heaven’s sake, have a will.

And, oh yes, write in an obscure language and get a talented writer/translator.

In Charles McGrath’s New York Times piece, “The Afterlife of Stieg Larsson,” Larsson’s messy legacy could be the makings of yet another novel.

I haven’t read any of Stieg Larsson’s popular crime books – The Girl with the Dragon Tattoo or The Girl Who Played with Fire. The last in the series, The Girl Who Kicked the Hornet’s Nest,

has been as anticipated as a Harry Potter book.

Any recommendations – to read or not to read?