The housekeeper trips on the vacuum cleaner cord and falls down the steps to her death; within days her employer’s head is chopped off with a sword, and suspects are everywhere.  Almost every character has the motivation to kill the victims in Anthony Horowitz’s Magpie Murders.

Book editor, Susan Ryeland introduces the story with a delicious warning, promising more than the next best seller by one of her popular writers, Alan Conway.  In a clever mystery within a mystery, Horowitz channels Agatha Christie in a crime story with more than red herrings and formulaic clues.  Pay attention when you read or you will miss something.

After the editor’s short preface, the character in her author’s book, Atticus Pund, decides to solve one last crime in the three months the doctor has given him to live.  With his trusty assistant, Fowler, he leads the investigation of the English manor house murders.

If you are a fan of Agatha Christie, you know, however complicated the plot and no matter how many characters you cannot remember, she will save you in the last chapter with her wrap-up and reveal not only the murderer but also the cause and effect.  But, what if the last chapters were missing?

After following the suspects and Pund’s finally declaring he knows who did it, the story suddenly stops and Horowitz drags the reader reluctantly back to the opening scene of the editor reading a book soon to be published.  Not having the last chapter, she begins to summarize the action and decipher the clues to uncover the ending in pages she hopes will be on her desk when she returns to her office.  Happily, just like Christie, she neatly recalls all those meaningful incidents the reader has forgotten.

The story now shifts and gains momentum as the book editor becomes the detective, not only looking for those lost chapters but also possibly looking for the murderer of her author.  As she questions each suspect, she uncovers his idiosyncratic humor placed within each of his mystery books, and the hidden clues about people he knew,  creating characters based on those he would mock.  Horowitz sprinkles the narrative with references to real authors the reader will recognize.

Although I usually hurry through the last pages, wanting the solution – and I did peek at the cryptic last line on the last page (“I had been the detective and now I was the murderer”) – I slowed down for the last hundred pages, reluctant for the story to end.  When it does…each of the murders is solved, and I never suspected whodunit.

Horowitz is a new author for me, and when I researched his background I found not only is he the author of the teen spy series featuring Alex Rider but  was also commissioned by the Conan Doyle Estate  to write two new Sherlock Holmes novel, and commissioned by the Ian Fleming Estate to write the James Bond novel Trigger Mortis.  In Magpie Murders, Horowitz references Sophie Hannah’s authorized reboot of Agatha Christie in The Monogram Murders.

In an interview with the New York Times, Horowitz said he has already finished his next adult murder mystery, in which he has written himself into the plot. “Of course, I’m the one who is constantly fooled,” he said. He added, “A book does magic without saying, “Pick a card.” A whodunit is, at its best, a huge magic trick that says, “I’m going to tell you a story.”

I can’t wait to read it.

Guido Brunetti is the kind of police commissario you would want in your corner.  He is civilized and soft-spoken, reads the classics every night, loves his university professor wife and precocious children.  Guido is an honorable man amidst the corruption.  As a fan of Leon’s series, I enjoy her descriptions of the rhythms of life in Venice and Guido’s family as much as the solving of the crime.

In this twenty-sixth book in the series, Commissario Brunetti needs a break.  After faking a heart attack to save his colleague from attacking a nefarious criminal, Brunetti is sent to the emergency room, and the doctor readily prescribes him two weeks of rest, away from the bureaucracy and crime of Venice.  Conveniently, his wife’s wealthy family owns an isolated villa on a nearby island with a stocked library for the erudite detective (Leon provides titles) and the promise of exercise rowing the deserted canals surrounding it.

Brunetti passes his days with the caretaker of the estate, Davide Casati, an old friend of his father, rowing into the laguna and checking on Casati’s beehives, until the death of bees and a sudden storm shatters his idyll.

Casati is found dead, and Brunetti finds himself back in investigator mode.  As he researches the man’s death, Brunetti finds an insidious cover-up of toxic waste illegally dumped in the laguna, leading him to question whether Casati’s death was accident or murder.  Leon answers in the end, but not without a strong statement about pollution and its effect on the environment.

Although the movie has been panned by critics, I liked “The Words” with Dennis Quaid and Jeremy Irons.    The story has would-be writer Bradley Cooper finding a manuscript that has been stashed for years on a dusty shelf in a Paris antique shop.  The words are better than any he has ever written, so he retypes them and submits the manuscript as his own.  His brazen theft doesn’t seem to bother him until he is confronted by the real author, now an old man (Jeremy Irons).

The story within a story ends with a cautionary line from yet another author (Quaid).  Quaid’s character notes that fiction and real life are so close that you may imagine that fiction has become reality.  When I’m reading historical fiction, it is easy to believe the author had been under the bed to actually hear the conversation between characters. 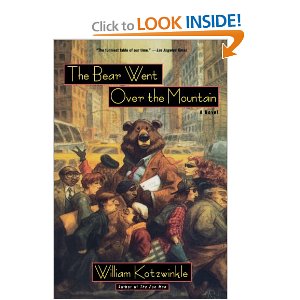 a funny satirical fable about a big black bear who finds a manuscript under a tree in the Maine woods, dons a suit and a tie, and heads off to the big city to seek his fame and fortune.  Could The Bear Went Over the Mountain have been the inadvertent inspiration for the movie?  Seems everyone wants to be a writer…