When I read a book a day, I never imagined not wanting to read.  Most of my life revolved around stories professionally and personally but when my own story became the drama, it’s plot was too complicated to let any other in.  Needless to say, I won’t reveal the personal – those who know me already have it – but my unexpected separation from bibliotherapy taught me to savor moments of inspiration and not take them for granted.

Kate Atkinson’s Transcription survived the purge of my bookshelves with two boxes of notable reads sent to the library annual booksale.  I uncovered its red cover under the dust jacket and it followed me until I gave in and opened to the first pages.  Many of you have already read this complicated spy novel with a twist I almost missed at the end, and Atkinson has already produced another book published last month.  But if you haven’t read Transcription, its story holds enough historical information to tease you into wondering what is indeed fact, as well as Atkinson’s trademark knack for plot twists to keep you  reading between the lines of the characters’ lives in this tale of espionage and treachery.

Juliet Armstrong flashes back to her life as a secretary secretly transcribing conversations for the British spy organization MI5.  Jonathan Dee neatly summarized the novel in his 2018 review for The New Yorker with enough detail to satisfy your curiosity if you are still deciding if you want to read the book – Kate Atkinson’s Spy Novel Makes the Genre New.

The Author’s Note at the end of the book led me to more books.  Penelope Fitzgerald’s Human Voices is listed as  one of Atkinson’s references.  Firzgerald’s 1980’s novel tells “the fictionalised experiences of a group of BBC employees at Broadcasting House, London, in 1940 when the city was under nightly attack from the Luftwaffe’s high explosive, incendiary, and parachute bombs.”  I became a fan of Fitzgerald after reading The Bookshop.

Atkinson’s newest publication revives her detective series with Jackson Brodie as the star Cambridge detective.  Of course, I need to backtrack to the first book – Case Histories – and maybe proceed to the other four before my library waitlist number for her latest, Big Sky, comes up.

So I have books to anticipate, and more.  A friend sent me hardback copies of the newest Elin Hildebrand and Jennifer Weiner books; my stack is growing again.

What have you read lately?

If you could invite any five people—dead or alive—to dinner, who would you choose?

“We were staying at David’s apartment in Paris the night the woman fell onto the Metro tracks.”

She could although she didn’t seem able to respond.  She was badly damaged.  Broken.  She had been hit by a car.   It might have been her own fault, she had been distracted – she had lived for so long abroad that she had probably looked the wrong way when she was crossing Wigmore Street in the midsummer twilight.  Between the darkness and the daylight. 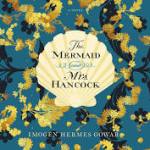 The Mermaid and Mrs. Hancock by Imogen Gower  (publication in USA – September 11, 2018)

One September evening in 1785, the merchant Jonah Hancock hears urgent knocking on his front door. One of his captains is waiting eagerly on the step. He has sold Jonah’s ship for what appears to be a mermaid.

for in this world there is no achieving anything all alone. Cast in thy lot and share the purse. And this is why a prudent man does no business with drunks, with rakes, with gamblers, with thieves, or anybody with whom God might have cause to deal severely. You cast in your lot and you share his sin. And it is so easy for a little craft to be dashed against the rocks. So easy for cargo to settle five fathoms deep in the dark. Sailors’ lungs may brine and their fingers may pickle; all that protects them is God’s cupped hand.

What does God say to Mr Hancock? Where is the Calliope, whose captain has sent no word in eighteen months? The summer trails away. Every day the mercury drops. If she does not return soon she will not return, and the blame may well lie with him. What has he done, that might demand such punishment? Who will throw in their lot with his if they suspect him ill-favoured?

Somewhere a tide is turning. In that place where no land can be seen, where horizon to horizon is spanned by shifting twinkling faithless water, a wave humps its back and turns over with a sigh, and sends its salted whispering to Mr Hancock’s ear.

This voyage is special, the whisper says, a strange fluttering in his heart.