If real travel is not possible, vicariously circling the globe with Mark Twain might be the next best thing.  In Richard Zacks’ Chasing the Last Laugh: Mark Twain’s Raucous and Redemptive Round-the World Comedy Tour, I found a way to improve my humor and satisfy my yearning to visit new places.

At fifty-nine years old, Samuel Clemens (Mark Twain) had a magnificent mansion in Connecticut he could not afford to live in, was renowned as a humorist and author, and had made so many bad investments in quick rich schemes he had lost his heiress wife’s fortune and was seriously in debt.  The typesetting machine he had hoped would revolutionize publishing and secure his fortune was having problems, so he decided to go on tour to recoup his losses.

Through letters, diaries, journals, newspaper articles, and quotes from Twain himself,  Zacks captures the three year tour of the soft-spoken white-haired author in an evening suit, who travelled in luxury at the expense of his sponsors and never cracked a smile as he entertained the world.  Fans of Mark Twain will appreciate learning more about the author and enjoy his perspective on the world and life.  Samuel Clemens lived life large.

I am reading the book slowly and savoring…

Also Reading:  The Life of the World to Come

When someone you’ve known for a while dies unexpectedly, the tendency may be to ponder your own mortality or perhaps broaden your thinking into the universe at large. Dan Cluchey’s The Life of the World to Come is feeding my mind’s meanderings as I think about a friend who died recently. Sometimes a book comes to you – a love story mingled with thoughts about the afterlife 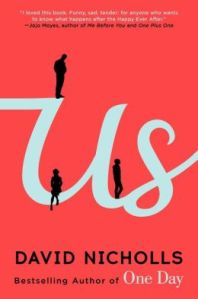 How do you react when you know someone is testing you – try your best to pass the test, or resent the pressure? In David Nicholls “Us,” Douglas Petersen has only the family summer trip to Europe to prove his worth to his wife, who has informed him she is leaving after their son goes off to college in the Fall. Makes you wonder why he would bother – but he does.

The first half of the book follows Douglas, the earnest scientist, and his wife Connie, the free spirit artist, as they try to educate their teenage son in the beauty of European art, as the family starts its ” World Tour.” The squabbles will be familiar to anyone who has tried to raise a teenager and the descriptions of the continental surroundings will bring nostalgia to anyone who has been to Paris and Amsterdam. As the reader gets to know the two principal characters, their extreme differences emerge, and it’s a wonder they have stayed together for twenty-five years.  As well-meaning as Douglas is, his starched attitude toward life is annoying. Of course, organization and sensible living has its virtues, but Douglas seems to have become mired in them, and lost all sense of fun and adventure. On the other hand, the mother/son recklessness counters his rigidness, and you may find yourself rooting for him, while wishing he would acquire more spontaneity.

By the second half of the book, the family journey has dissolved into a mother going home alone, the teenager going off with a newfound girlfriend, and Douglas determinedly pursuing his son across Europe – to find him, to apologize for not defending him in a bar brawl, and to save his family. As the tale follows Douglas through Verona, Venice, Florence, and Sienna, his character changes, morphing from stale rules follower and guidebook reader to a sympathetic version of Charlie Brown – a good guy, despite his quirks.  The epiphany in Barcelona leads to a new understanding among the three characters, but Nicholls adjusts the romantic ending I had hoped for, into a realistic amalgam of trust, love, and self-discovery.

The thoughtful exploration of this marriage, with its familiar rhythms, had me hoping for some compassion for Douglas, who could not help who he is – and Nicholls delivers.  But, whenever I decide to venture on a World Tour, I am bringing this book with me – from London, through Paris and Amsterdam, with train rides across Europe to Italy, and eventually Madrid and Barcelona – Nicholls offers a connection better than any guide book.